The existing conveyor came with motors and line shafts, a lift gate, and two motor starter panels. None of this equipment was commissioned because there was no industrial control for the entire system. An operator would put finished parts into boxes and then proceed to push the boxes down the conveyor. The conveyor was

roughly 300 feet long so the boxes would make it about half way down the conveyor until they would come to a stop. At that point, the operator at the other end of the conveyor would then walk halfway up the conveyor to retrieve the box and push it down to the end where the same operator would then finish the boxing process.
Not only was this not time efficient, but created unnecessary extra wear and tear on the operators that left them fatigued at the end of the shift.

Industrial Automation worked with Walzcraft to not only integrate the motor controls, industrial control panel, and sensors for conveyor functionality, but also to yield improved efficiency, operator friendliness, and safety. In order to accomplish this, Industrial Automation provided a separate control panel that would house a Click PLC, a C-More Micro EA3 series touch screen, and other control components and terminations. Industrial Automation developed a PLC program that would monitor the sensors and control the conveyor braking system and motor starters. We also developed a touch screen program that would allow the operators to manipulate timers such as how long a sensor reads a box before applying the brake(s), automatic shutdown if the conveyor was not being used, and start/stop delays. 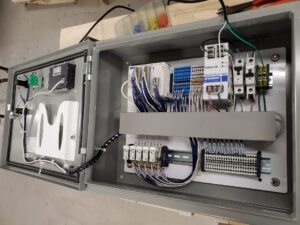 allowed the operators to control the conveyor in multiple different ways.