Provide a System to apply an even coating on various sizes of residential and commercial doors at or better than current cycle time.

The application of a coating was done by a person with a spray gun. This was a very arduous task in that the typical door is in the neighborhood of 80 inches tall. This required the person to reach above their head to do the upper portion of the door and then bend down to the floor to reach the lower portion of the door. After a short period of painting operators would become fatigued and the application of the coating would become inconsistent resulting in a large amount of rework.

Industrial Automation worked with Badger Corrugating Company to develop a solution for coating the doors in a way that would provide more consistent results. A collaborative robot was determined to be the best alternative as workers would be required to move the doors through the spray area. All of the coatings applied to the door are water based so flammability was not an issue.The robot was mounted to a stationary base and equipped with two spray guns as the end of arm tooling. The two guns are at optimal space to

provide even coverage as they pass over the door. At the top and bottom of the door the guns are turned off to reduce the amount of overspray.

A Compact Logic PLC and touch screen were incorporated to allow the operator to select the appropriate recipe based on the door dimension.  This interface also allowed management to program new and modify existing recipes.  Programming was added to control the automatic door rotation, brush cleaning, and spray gun triggering.

This has provided a much more consistent coverage of the door surfaces. Rework time has dropped significantly, operator fatigue has been reduced, and productivity increased while maintaining worker safety. 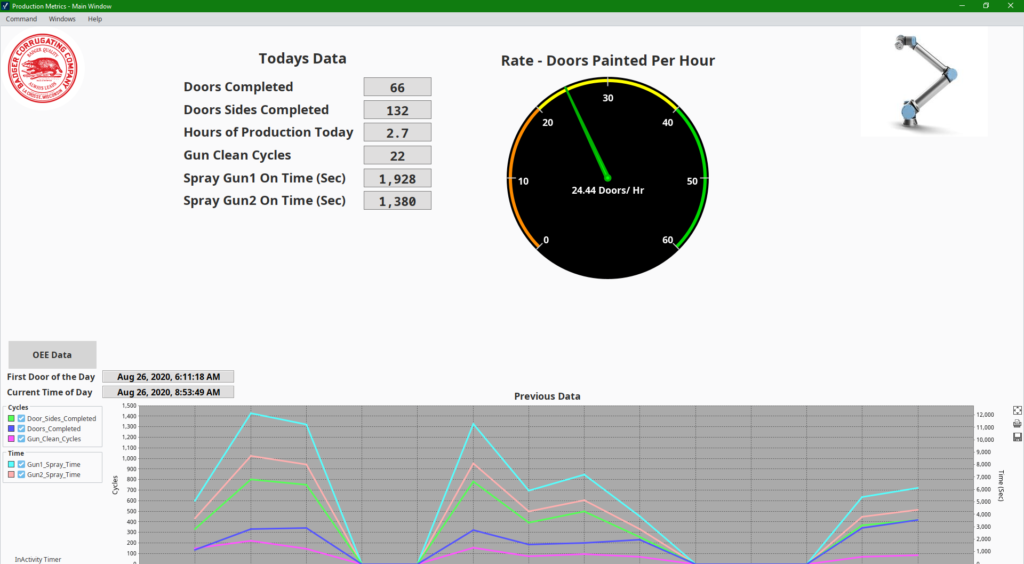