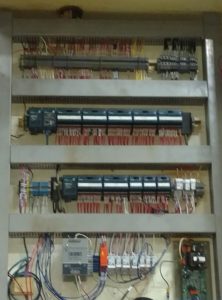 Previous System: The system that was in place when this project began was partially automated. The uncoiler and straightener were automated to feed as the press requested material, but transferring the in-process parts from station to station was done manually. Whenever this machine was running, it required 7 press operators to stop production on other presses in order to transfer parts manually.

New System Design and Function: An automatic transfer system was chosen and purchased from another manufacturer as a stand-alone system. 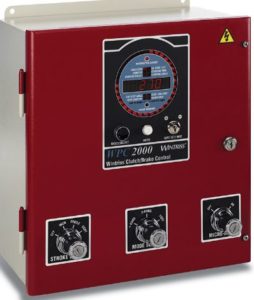 Industrial Automation and Engineering was tasked with integrating this stand-alone automatic transfer system with the press so that they would run seamlessly as one unit. The first priority was coordinating the safety circuits of the press and the transfer system. This required an overhaul of the existing press safety as it was not control reliable with the current safety standards. Keyence programmable safety scanners were added to replace the light curtains. The safety scanners reduced the footprint of the machine as hard-guarding was no longer required to go around the entire transfer unit. All of this had to be implemented so as to be functional with the existing Wintriss press control, as well as the GuardLogix safety controller that came with the transfer system. 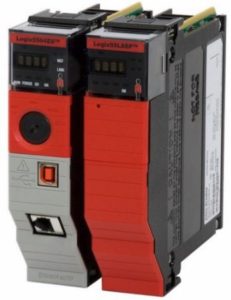 The new safety scanners were installed in a manner that allows the press operator to monitor what each scanner is seeing – all from his operating position. The operator was also given the capability to select between multiple safety programs via the HMI touch screen, depending on the job being run at that time. This provided customized safety for each job without physically altering the safety equipment.

The next task was to set up many interlocks in the press control program so as to ensure that the press would not crash with the transfer system. This communication between the machines ensures that the transfer system can move parts reliably in the brief window it receives each stroke as the press runs in continuous mode.

Project Results: The integrated transfer system runs as one unit with the press. Operating this machine now requires only two operators. Greater productivity was reached on this machine with less man-hours, which also increased productivity on other presses in the shop. And, all of this was accomplished while increasing safety on the machine.