Project Scope: A hardwood flooring manufacturer wanted to increase the productivity of their lumber handling and defect detection / rejection system.

Previous System: The previous system for lumber grading and defect removal involved multiple people pulling individual boards from a skid, one board at a time. They would visually inspect the boards and mark any areas considered to have defects. They would then send the boards on to three automated crosscut saws for removal of the defects.

New System Design and Function: The new system was designed to reduce human interaction and handling of the boards. The mechanical layout was developed by the hardwood flooring manufacturer, and a new conveyor line was installed with an automated vision inspection / marking system. This conveyor line feeds upper staging tables with tipples. The boards are then automatically fed down to individual lower tables, one table for each saw. Then boards are automatically fed from the tables into the saws as demand requires.

Industrial Automation was asked to design and develop a control system to monitor and control the flow of boards through the various tables to optimize the usage of the saws. To that end, we selected a Rockwell Compact Logix PLC to be used with multiple Allen Bradley PowerFlex variable speed electric motor drives, with an Automation Direct Touchscreen for the operator interface.

An operator starts the system at the touch screen. As the boards feed from the automated vision inspection / marking conveyor they are indexed onto the upper table. The upper table consists of chain conveyors, and indexes the boards up to a stop, leaving the boards side by side. As a group of boards come together, they are released and fed across the upper conveyor to the next available crosscut saw. When at the next available saw, a tipple will lower, allowing the group of boards to move down a sloped conveyor section onto the lower saw infeed table. From here they are automatically fed into the saws one board at a time in a nearly end-to-end fashion. If a group of boards is available at the stop and no saw table is clear, they may be released and held further down the upper table at a second or third stop. This allows for the staging of multiple boards so the inspection system can run continuously, maintaining overall efficiency.

System Results: The new system reduced the number of employees required to handle the boards. It also reduced the amount of board handling by employees, resulting in less operator fatigue and stress. System control was kept uncomplicated by use of graphical representations of equipment on the operator interface. This allows for multiple people to be trained in the use of the equipment to ensure production runs efficiently and at full capacity. 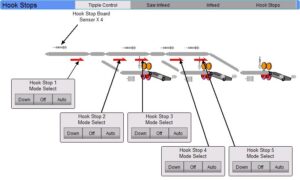